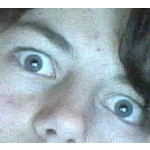 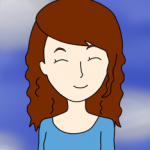 She has long brunnette hair that is often curly, but sometimes straightened, eyes with unidentifiable-coloured irises, and a tall, slim build. Most times, she can be seen wearing either her mainly blue school uniform on weekdays and her PJs on weekends and school holidays.

She can be very rough, quiet, and insensitive (or rude in some cases) to people she doesn't know depending on the situation, but is warm and loving towards those who are kind and prepared to accept her sometimes dramatically swaying mindset. She hates disorder, chaos, and homework.

Sophia was born to Clare and John in the city of Winchester on the 28th of October, 1997 (on a Tuesday). She lived in Southampton, and was diagnosed with high-functioning autism at the age of six. She went to infant school, then junior school, and is currently in senior school. When she was ten, her little brother Tommy was born, so her two elder brothers James and Lewis had to move into the garden sheds and she moved into the second biggest bedroom in order to make space for him in the three-bed bungalow.

Chapter One: Professor Layton and the Curious VillageEdit

When Sophia was eleven, a game called Professor Layton and the Curious Village came out in the shops. She received it for Christmas in 2008 after reading a Nintendo Gold Award review for it, and spent most of 2009 (until a week before Pandora's Box) trying to solve the last puzzle Seven Squares in order to find out the ending. She eventually did, with the help of the Professor Layton Walkthrough.

Around November time 2010, Sophia fell very ill. By now, her family had obtained a laptop with (poor) Internet access, so spent her time browsing. By accident, she discovered a flourishing Professor Layton Wiki, and could not resist joining Tjcool007 and AdventureWriter28 in contributing. At this point of time, she was called SophiaDena13, and had not realised that it was a US Wiki, wasting large amounts of time trying to insert UK names and details.

By joining the Wiki, Sophia accidentally discovered the plot of Professor Layton and the Lost Future, and via YouTube, managed to watch its cutscenes. Nevertheless, she received Lost Future for Christmas, and spent the whole of Boxing Day completing it. She had set her fastest time yet of ten hours, then bested it with eight. A good amount of time was also spent repeatedly wiping away the tears caused by Claire's death.

Sophia had finished Lost Future so quicky that she didn't know how to pass the time until the release of Spectre's Call. Months passed, and SophiaDena13 took holiday from the Internet. This stupor eventually came to an end when one day during the summer holidays, bored out of her mind, Sophia logged back in to the Wikia to find many new users, a beautiful new background image, and a whole lot of work to be done. Befriending the then-new MissToraleiLayton by designing her first OC Lisa for her, Sophia took up her other alias on YouTube as LeilaisCRAZY12, and began her research into Majin no Fue, Eien no Utahime, and Kiseki no Kamen.

Retrieved from "https://laytonocs.fandom.com/wiki/User:SophiaDescole13?oldid=7255"
Community content is available under CC-BY-SA unless otherwise noted.