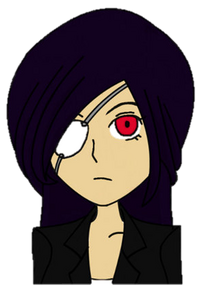 
Euann Altava-Ascad (brother-in-law)
"The hardest thing you'll ever learn, is just to love and be loved in return"

Morra Fallow, or "The Groke", is one of the characters in Orchestra of Wolves: Part 1 & 2. She works for the MI.

She wears a dark grey suit and black boots with a slight heel. Her hair is deep violet and worn half up, half down. She also wears a grey eyepatch.

It was said by another agent that "Morra Fallow sucks the life out of everything around her. Even candles refuse to burn in her presence. She is utterly hollow and souless." She is incapbable of expressing emotions and always speaks in a formal manner. Because of this, the MI prize her where as other people fear and avoid her.

Morra herself is incredibly lonely and is unable to form any kind of relationship, which makes herself her own worst enemy as she seeks a warmth and love she is incapable of feeling.

Whilst on a mission, there was an explosion that caused a window to break near where Morra was. Some of the shards entered her right eye and rendered her blind. As such, she removed the eye ball itself on the conclusion that it was now useless to her.

Orchestra of Wolves: Part 1 - The Greatest Riddle of AllEdit

Even in this story, little is revealed about Morra. She still maintains her position as a top sniper, and she is placed deep in a top secret mission that is never fully explained. She remains twenty years of age for the entire story.

Her first appearance is when she requests Emmy's assistance on a mission in a misguided attempt to sever Emmy's ties with the MI.

The second time she appears is to bear witness to Lando shooting Reader. Before this incident, she had visited Fawne and Louam at Julian's home (which is the one and only time she is ever in that house). Louam took an instant liking to Morra.

Retrieved from "https://laytonocs.fandom.com/wiki/Morra_Fallow?oldid=6796"
Community content is available under CC-BY-SA unless otherwise noted.