"For once in your life, listen to me! It's over! There's nothing we can do anymore- we'll never win this."

Lydia is a short woman with a small chest and waist. She

has sandy blonde hair and greyish blue eyes. Her skin has a light tan and she has light and unnoticable freckles.

She wears a white button up shirt tucked into a black skirt with knee high black stockings. Her shoes are black flats.

Lydia is quiet, but not shy. She prefers to speak only when spoken to or when she feels she has to. She can get very angry very easily if the wrong words are said. She generally is well mannered and calm, and usually has a positive and friendly aura. Most of the time she is smiling, as she is usually a positive thinker. When she isn't, it's because she is scared or nervous.Around most people, she is quite relaxed. Although a grown woman, she is still a child at heart and nine times out of ten will engage in conversations with Luke about toys or stuffed animals.

Not much is said about her early life, but she does reveal that her parents died in the blast that killed Clair. She was born on July 6th in the south of England to her father and mother; Lukas and Sarah Kely before moving to London a year later. She and Clive became fast friends.

As a teenager, she realised her feelings towards Clive and so devoted herself to being the best friend she could, as she knew that she would never have a chance with him.

As Clive's best friend, she willingly joined his reckless attempts at revenge, feeling she needed to look out for him. She is first seen in the Gilded 7 Casino, where she is playing piano for the guests. Clive makes a comment about her 'not meant to be here' before dragging the Professor and Luke to the storage cupboard.

You then meet her at the restuarant with Shipley, where she is voicing her worries to the postman before seeing Clive. She hugs him and says 'Thank goodness you're okay! I was starting to worry that you weren't going to get out of there...'

She plays a mostly minimal role until the end of the game, where as soon as the Professor unveils Clive as the real villain, she runs. She turns and says sorry at the last second before leaving.

When Clive begins to realise he's going to lose, she looks at him as he panics. He starts screaming about how he can't lose, when she snaps. She screams at him to listen to her, and that they're going to lose. Clive hugs her to try and calm her down. When she calms down, she realises just how bad the situation is and starts to cry, stating that there's no hope anymore. Clive hugs her closer, before releasing her and kissing her. He tells her to leave, to which she objects and promises that they'll either get out together, or go down together. They both agree on it, and then Clives goes into a rage again. he is then hit on the head, knocking him unconscious. She panics and starts to cry again.

At the end of the game, she isn't charged for Clive's crimes. She just promises him that she'll wait forever for him, before disappearing.

A Word from Me Edit

Ahh, Lydia. She started when I was only ten years old. I just drew her for fun, thinking it'd be a good idea to make a pretend Professor Layton character, A few days ago, I found the drawing and decided to replay the whole game. I've grown up since then, and this time I didn't get my mum to do most of the puzzles for me.

Last night, I had an idea for her story, and I chose t write it up on this wiki. I love this character, she's my favourite OC by far. 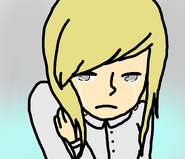 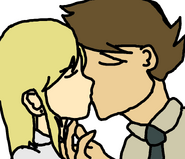 Add a photo to this gallery
Retrieved from "https://laytonocs.fandom.com/wiki/Lydia_Kely?oldid=7837"
Community content is available under CC-BY-SA unless otherwise noted.