"It was just play with Daddy?"

Missy (by Emmy and Lando)

Fawne Altava-Ascad is a character in Five Cigarettes Later. She is the illegitimate daughter of Emmy Altava and Lando Ascad.

As a six year old, Fawne is unusually short, standing at only 3'5". She has long wavy reddish-brown hair and very dark brown eyes. She wears her father's glasses (with fake lenses), neckscarf, and red boot Converses. Her dress is dark purple with unusually baggy sleeves, which act as substitutes for pockets.

So far, Fawne has been noted to carry; a photo of her parents, her inhaler, her cuddly penguin toy Boris, a bag of sweets, and on occasion, her parents' mobile phones, in her sleeves. 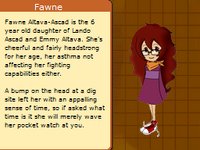 Fawne Altava-Ascad is the 6 year old daughter of Lando Ascad and Emmy Altava. She's cheerful and fairly headstrong for her age, her asthma not affecting her fighting capabilities either.

A bump on the head at a dig site left her with an appaling sense of time, so if asked what time it is, she will merely wave her pocket watch at you.

During the early days of her relationship with Lando, Emmy became pregnant. She didn't realise this until she was twelve weeks along (with help from Franz), by which she had already smoked and abused herself heavily. Emmy resolved not to have an abortion, and grew to love Fawne immensely. Lando was shocked when he found out, but too warmed to the idea eventually.

At twenty seven weeks, Lando met Emmy's uncle Julian when they went to stay with him after being warned of Jules's release from prison. Julian, distrustful of Lando, warned him that if anything should happen to Emmy, he would be taking custody of their child, even though Lando would be the closest relation after Emmy. This shocked and worried Lando to no end.

Soon after finding out that Franz had gotten the dates wrong (she had been further along than he said), Emmy went into labour. Lando was in Northern France at the time, working for Julian at a dig site, so missed the birth, arriving back home a few hours late from air delays, but got to meet their newborn daughter nonetheless.

When her grandfather Jules arrived on their ward, Emmy nearly died defending Fawne and Lando from him, and was hospitalised for a stab wound for the first few weeks of Fawne's life.

At a year old, she said her first word to Emmy and Lando: "Daddy". Lando was pleased but Emmy was insanely jealous and frustrated. This was also how Sharon found out about Lando's new family; she was talking to him on the phone and overheard her.

Fawne was nearly two years old when her little brother Louam was born. She was very enthusiastic about being an older sister, to the point where her excitement made Louam fall asleep (from his narcolepsy) on many occasions as they grew older.

Fawne acted as one of her mother's bridesmaids when Emmy married Lando, a month after Louam was born.

14 year old Fawne with her siblings.

Retrieved from "https://laytonocs.fandom.com/wiki/Fawne_Altava-Ascad?oldid=6819"
Community content is available under CC-BY-SA unless otherwise noted.