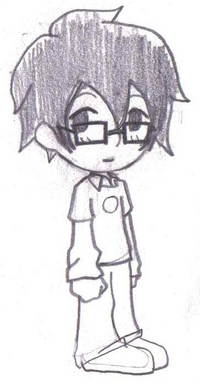 Euann Altava-Ascad, later Euann McKinley, is a major character in Five Cigarettes Later. He is the youngest child of Emmy Altava and Lando Ascad.

Euann is very quiet and withdrawn as a child, preferring to keep to himself. He grew attached to Reader, becoming the heir to McKinley Leisures after Reader's succession to Gabriel. As an adult, to other syndicate members, he was said to silence the room when he entered, the fear of him was so great.

Quiet and intelligent, Euann is the youngest of the Altava-Ascad children and is the strong and silent type. He loves reading and although he is his father's doppelgänger, he is a total introvert and rarely speaks.

19 year old Euann.
Add a photo to this gallery

Retrieved from "https://laytonocs.fandom.com/wiki/Euann_Altava-Ascad?oldid=6795"
Community content is available under CC-BY-SA unless otherwise noted.