Archibald "Archie" Pendrake was a former student of Professor Layton's archaeology class, before he quit to pursue his dreams of becoming a famous artist. He appears in several fanfictions and the Layton Life Roleplaying Forum. 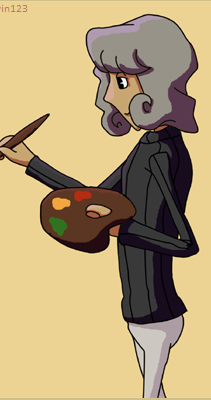 "Who the heck has naturally silver hair?"-- Rosetta Stone during her 'date' with Archie in The Woes of Being Rosetta Stone.

Archie has olive colored skin, dark eyes and angular facial features. His most notable physical aspect is probably his wavy silver hair. He wears a black jumper, grey jeans and black boots. He is rarely seen without his sketchpad in hand.

Archie usually has a polite amiable manner to people he meets. He is quick to offer compliments and often praises others for their abilities and style, insisting that they should always pursue their talents. Unfortunately it takes him several years to start following his own advice. Archie's father, Richard Pendrake, pushed him into studying archaeology rather than allowing him to become a proper artist. Though Archie obliged as he did not want to displease his father, this only increased his abhorrence of "accursed archaeology". (It also doesn't help that he possesses a minor phobia of dirt.) He can be stubborn when it comes to his detest of archaeology, to the point of distrusting archaeologists and artifacts in human hands. He believes treasures from long ago should remain undisturbed forever, otherwise people can be twisted by greed, wealth and power. When hearing about the events of Professor Layton and the Mystery of Stone, Archie was adamnt Lisa Adamson had been corrupted by the Head of Medusa through little fault of her own.

As an artist Archie is creative with a flair for painting and similar craftsmanship. At times one might find themselves falling asleep as he tends to ramble (a habit similar to his father) about art and frequently expresses his dream to become a renowned artist.

Not much is known about Archie's early life, except that a few years after he was born his mother, a fashion designer called Kimmy, left his father. She claimed that Richard obsessed over archaeology more than his own family. (Despite this, its implied Archie remains on good terms with Kimmy and keeps in contact.) Shattered over his wife's divorce, Richard thrust himself into his work even more than before. Determined for Archie to follow in his footsteps, Richard pushed him into the line of archaeology and dismissed Archie's own dreams as foolish.

Archie eventually started attending Professor Layton's archaeology classes at Gressenheller University. He was an unhappy and quiet student, but tried his hardest to satisfy his father. At some point he complimented Rosetta Stone's eyes and she dragged him on a 'date' in an attempt to make Professor Layton jealous. (Though, she doubted he was "head over heels" in love with her, just "polite".) This disaster of a date apparently left Archie scarred for life, as he nervously warned a Sammy Thunder not to steal Rosetta's seat during "Rock N' Glamour".

During Layton Life's "The Crowns of The Ages Adventure" (RP), Archie joins Professor Layton on a class trip to Rome because his father insisted he needed extra credit in archeology. Archie would regret this decision as the trip became a dangerous worldwide adventure to collect three ancient Crowns. However, there were some bright spots; he gains newfound respect for Professor Layton, befriends Flora along with a ginger cat called Henchley and bonds with Lisa. He also finds the courage to inform his father that he will no longer be studying archaeology, but art instead.

Following this in "A Walk Through Time" (RP), Archie attends Layton and Claires' wedding with Lisa, though he is wary due to the trouble Layton frequently attracts. Much to Archie's horror, he along with several of the other wedding guests are sucked through a time portal. He reluctantly joins the adventure again, this time to collect four legendary artifacts to restore time to order.

In "The Fates Tome" (RP), Archie refuses to accompany Layton on his latest endeavor to find the Fates Tome. He and Lisa remain in London, but upon receiving an ancient key from his father, Archie is branded a 'thief' by the ruthless Hellfire Cult. Two Cult members- siblings Saturn and Sinnera Demona [created by Abitat Eco]- kidnap him to face his punishment, which entails becoming possessed by the dead Thomas Rothchild's [created by EmmyEeveeZorua] spirit.

◾Archie's name is derived from his love of art. It could also be an alternation of "Arthur Pendragon".

◾People frequently mix up his name, much to his dismay. His father calls him "Archibald", Rosetta calls "Artie" or "Ernie" or "Sketch Geek", and once someone even called him "Mr Silver Hair".

◾He appears to inherit his silver hair from his father (though Richard's is going grey now).

◾He enjoys watching sunsets and his favorite food is pizza. 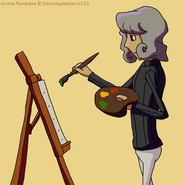 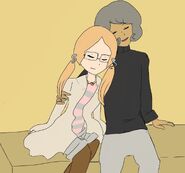 Archie and his crush, Lisa.
Add a photo to this gallery
Retrieved from "https://laytonocs.fandom.com/wiki/Archie_Pendrake?oldid=7702"
Community content is available under CC-BY-SA unless otherwise noted.